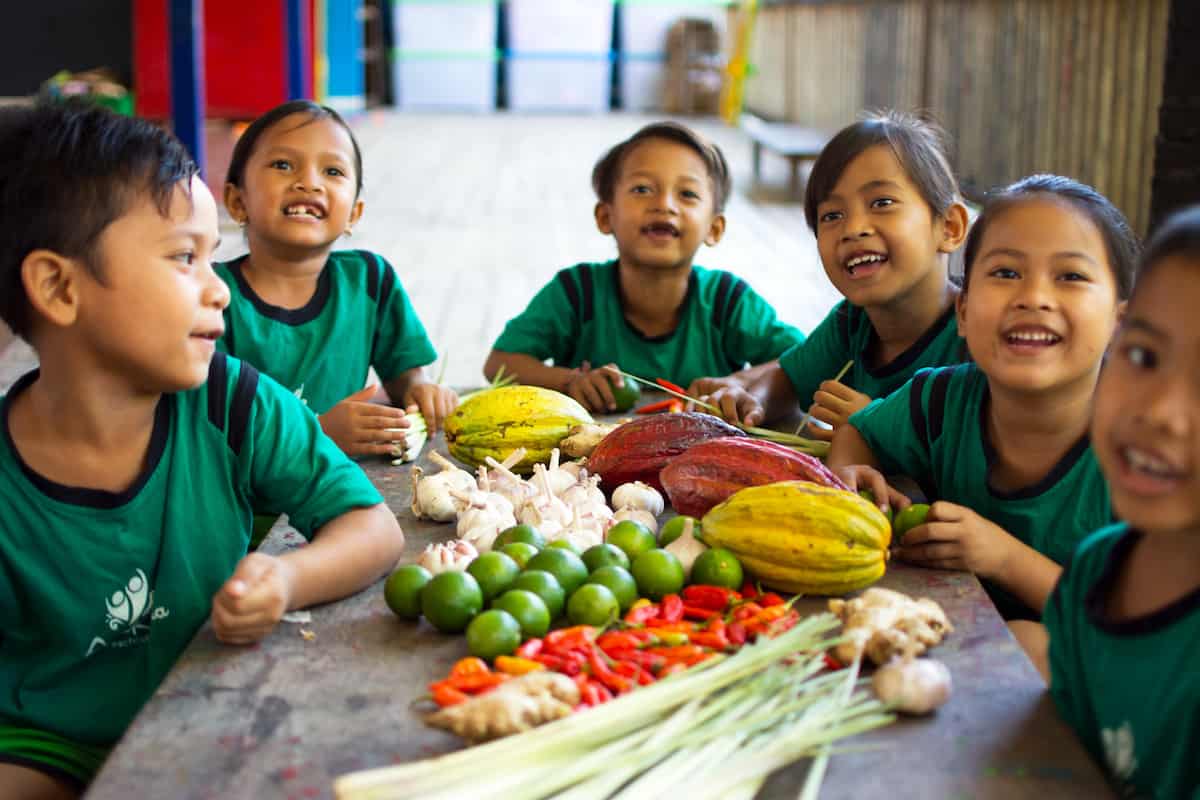 From compostable coffee capsules to rice berry, these social ventures have made it their mission to create more social and environmental awareness around our food and drinks consumption by empowering local communities and championing sustainable production practices. Food for good is on the rise in southeast Asia.

Behind rugged mountains and dense rainforests, the rural villages of East Bali are home to impoverished cashew-farming communities who – due to lack of alternative employment opportunities – rely predominantly on agriculture to make ends meet. 80% of the island’s raw cashews had been traditionally sold off at an extremely low price for processing in Vietnam and India, and most farmers were left to survive with an average income of less than $2.5 a day.

To tackle rampant unemployment and poverty and in the region, in 2012, East Bali Cashews created Indonesia’s first vertically integrated cashew processing business for the local production and sale of raw nuts or other value added products such as flavored cashew or granola. They provide critical infrastructure and training for farmers to take ownership of the entire production process and secure stable employment, with a positive spillover effect on their families’ livelihoods.

The social enterprise works closely with the farmers to help them adopt sustainable farming techniques, and actively involves them in initiatives targeted at improving crop productivity, including the set-up of Village Drying Centers (VDCs) to minimize product loss, and the rejuvenation of cashew trees through a seedling nursery and distribution program. Farmers are also encouraged to diversify their income sources through the introduction of new crops such as rosella, and new activities such as bee-keeping.

East Bali Cashews empowers the community to assume management positions within the social enterprise, and purchases raw cashews from small-scale cashew tree plantation owners to provide them with a stable source of income. They have also built a preschool around their factory to encourage farmers to enroll their children into school at an early age, and thereby improve literacy rates in the region.

The social venture is a true champion of the circular economy with its eco-friendly production processes and carbon-neutral technology. Following a zero-waste ethos, the leftover empty cashew shells, along with wood chips from old cashew trees, are recycled to power the steaming and drying process, while the residual biochar is used as a carbon-rich fertilizer.  Excess shells are also sold to small businesses as an organic fuel, and an onsite water filtration system serves to repurpose wastewater for gardening.

In alignment with its holistic approach to education and income generation, the social venture runs immersion programmes for the general public, targeted at raising awareness on local food production, social entrepreneurship and community living. Proceeds go towards funding farmer training and educational scholarships with the aim of developing the local economy, and encouraging young women to pursue food or agriculture-related higher education.

IMPACT: East Bali Cashews has quickly grown into a self-sustaining business with an average annual production and sale of 900 million tons of raw cashew nuts and an average 80% growth in revenues year on year. Since 2012, the social enterprise has employed over 450 farmers in direct production or support services, 85% of whom were previously unemployed local women who now have access to a steady source of income, professional development opportunities and education for their children. The Village Drying Centers are run by the farmers themselves, and have contributed to increasing their household income by 30%.

As more coffee drinkers worldwide opt for their daily jolt of caffeine via capsules, critics warn that the plastic or aluminium bucket-shaped and foil-covered pods are a significant environmental menace.

Nespresso, a leading powerhouse for coffee machines and single-serve coffee capsules, launched its own recyclable coffee capsules program in 2011. In Singapore, the aluminium pods are dried and recycled, while the used coffee grounds are donated to a local farm for composting. No data has, however, been released on what percentage of customers has actually returned their used capsules for recycling, and that’s where compostable capsules become more handy – they circumvent the need for additional consumer effort and thereby increase positive environmental impact.

Java Mountain Coffee’s mission and UN commitment is to empower 1 million rural women and plant 3 million coffee and shade trees by 2030.  10% from the sale of micro-roast coffee and 2% from the sale of farm fresh green coffee beans are channeled into the Women’s Empowerment Innovation Fund, created with the dual mission of empowering female farmers, while combating climate change.

IMPACT: The Fund helps finance the set up of women-only coffee cooperatives, which provides internationally recognized Fairtrade and RainForest Alliance certification, and works towards establishing fair market conditions for female farmers. To date, the two cooperatives established in Bali and Java count close to 500 women among its members. The cooperatives offer a channel for women to break down gender barriers, and pursue a stable livelihood in the coffee industry.

Climate change has had a drastic impact on coffee harvesting – extreme weather conditions wash away rich soil nutrients, yield productivity has dropped dramatically, and crops are increasingly exposed to coffee rust, a fungal disease that cuts short the life span of a coffee tree. Shade trees could shield coffee trees from degradation, yet less than 20% of coffee farms in Indonesia provide shade as a result of hundreds of years of deforestation.

The social venture is due to roll out a sustainability program, including a nursery initiative to grow new climate resistant coffee seedlings and trees to shade the coffee plants. However, harvest failures caused by excessive rain and flash floods in 2017 impacted close to 70% of the farming areas in Java and Bali, disrupting the implementation of the program.  The initiative, once operational, will provide a secondary source of income to female farmers, and will be key to strengthening the coffee supply chain.

3) Lifting rice farmers out of poverty, one grain at a time

Siam Organic produces organic and healthy food products with a mission to improve the livelihoods of rice farmers in Thailand. Farmers in the Northeastern region of the country are amongst the poorest because of their use of low quality seeds and inefficient agricultural methods, exacerbated by climate change and rising production costs.

At the start of the season, Siam Organic provides their farmers with high-quality Jasberry rice seeds, and trains them on organic farming practices. Harvesting is done entirely by hand to produce the best quality rice and minimize the farmers’ environmental footprint. Siam Organic works with scientists to advise farmers on the most ideal time for planting to counter the adverse and unpredictable impact of climate change, and also offers microfinance loans in partnership with the online lending platform, KIVA.

The social enterprise requires 25% of the yield to stay in the farmers’ households to encourage healthy eating habits in their community, and guarantees payment for the remaining produce at twice the price of what they would usually receive for conventional jasmine rice.

IMPACT: Since the start of its operations in 2011, Siam Organic went from working with 25 to over 1,800 farmers, improving the lives of more than 9,000 people. According to an independent social impact assessment in 2015, the farmers supported by the social venture at the time earned 14 times more compared to conventional rice farmers in Thailand, the equivalent of US$ 1.72 million. In 2017 alone, Siam Organic farmers planted 2,800 hectares worth of land, the equivalent of almost 4,000 football fields. Siam Organic is also the first food company in Thailand to have become a B Corps, a certification recognizing businesses that meet rigorous standards of social and environmental performance, accountability, and transparency.

Bettr Barista also runs pop-up brew bars at corporate events, and in July 2016, the certified B Corp launched its first retail coffee carts. Community coffee bars and coffee carts are staffed in part by Bettr Barista graduates, which allows them to tap into their entrepreneurial ambitions, while amplifying Bettr Barista’s social impact and extending its footprint to the everyday consumer. A portion of the revenue goes towards supporting the higher education of at-risk youth.

IMPACT: While almost half of the trainees did not have a steady source of income prior to partaking in the Holistic Training Programme, 93% went into permanent employment following graduation. Bettr Barista’s 44 alumni, who on average support four dependents each, now earn a cumulative total of S$1.1 million in salaries.

In 2017, Bettr Barista has won the President’s Challenge Social Enterprise Award, but Founder Pamela Chng and her team are not resting idly on their laurels. Their latest objective is energy self-sufficiency and to be powered entirely by solar energy come 2020 – the social venture is currently 20% along the way to reaching this target.

They are also working towards integrating other vulnerable groups into their training program, such as the elderly and people with disabilities, and have plans to expand regionally, as early as 2019.

Food Waste and the Circular Economy with Justin Kamine