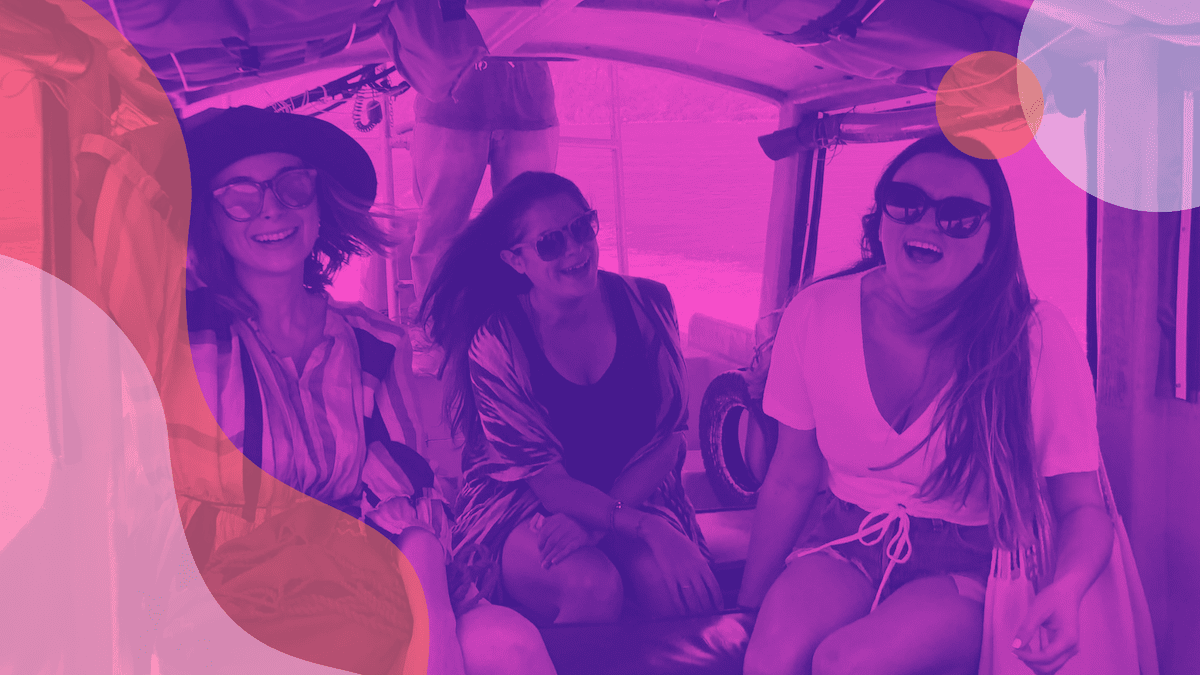 Starting your own company may seem daunting, but with the right tools, resources and mentality, you might be surprised at how achievable it can be. Just ask the founders of Bathen, a women-owned fashion brand that creates ethically handmade “after-bath wear.” Their line of colorful bathrobes, which in a variety of vivid striped colors, is aimed at making you feel glamorous post-bath (or shower).

The brand launched in November 2019 by three friends—Hannah Zisman, Emily Painter, and Elisiana Diaz-Martin—who noticed a gap in the marketplace for non-traditional, colorful robes that not only bring a new level of style to bathwear, but do so in a socially responsible way.

Bathen’s mission to create a socially conscious brand with ethically made products stemmed from Diaz-Martin’s experience at Maya Traditions Foundation in Guatemala. She spent two years working with a variety of women weavers, bringing their products to large-scale partners in the U.S. She was moved by the impact this had on the women involved, who may otherwise not have had many opportunities.

“She really saw the change that they were able to create for themselves, their families and their communities,” Zisman says. “Her time there is really what inspired us to follow an ethical model.”

After a little over one year, Bathen has developed a reputation for itself, producing coveted products that consumers can feel good about flaunting. Here, co-founder Hannah Zisman reflects on her experience launching a socially conscious brand and the key lessons she learned along the way.

1. Don’t give up on making your company socially responsible.

The biggest challenge Bathen immediately faced was finding the right ethical artists and partners to make their product. With little experience in sourcing and production, Zisman says they didn’t know where to start, but were determined to avoid mass-produced, fast fashion.

Despite the challenges and uncertainty, they never doubted that it was possible. “That was a core part of our business,” says Zisman, “that whatever we were creating was made ethically, that we were paying people fairly, that they had good working conditions. And to think about doing it any differently just felt wrong.”

Zisman said they dedicated time to extensive research and remembers creating a spreadsheet of hundreds of potential producers. They eventually partnered with a fair trade organization who helped Bathen craft their perfect robe. Additionally, they found ways to use sustainable packaging with recycled materials including reusable cotton bags for delivering their robes.

“Knowing that we’re creating a product that is responsibly made feels really good,” says Zisman. “I don’t think we could imagine ever creating a business that didn’t have this social responsibility aspect to it.”

2. Take advantage of your resources.

Without any outside funding, aside from minimal investments each of the three founders contributed, Zisman and her team made the most of digital marketing tools and social media to launch their company.

“I don’t think you need a ton of money these days to start a business. There are so many tools out there that are just ready to go,” said Zisman. Among her favorites are Shopify and Instagram. Zisman created Bathen’s website using Shopify’s easy-to-use platform and ready-made templates, making the process of creating a site from scratch impressively turnkey.

Instagram, meanwhile, has been the focus of their promotional efforts. “From the onset, we knew we wanted to be a very visual, social-first brand, so one of the most important things for us is making sure that our products are Instagram-friendly.”

There’s no arguing that Bathen’s colorful robes are perfect for Instagram. Their feed invites viewers into a vibrant, sunny paradise of stylish comfort, pairing Bathen products with tropical flowers, inspirational graphics, and aspirational settings. To achieve the social success they desired, Zisman says photography was what they invested in most, second only to their product. They sought out a New York photographer who could capture their fun, colorful, comfortable aesthetic to shoot their launch campaign. Zisman credits this visual, social-first mentality for “getting a lot of eyeballs on our brand” from the get go.

She also leveraged her connections in the fashion and media industry and experience in marketing to lead good old-fashioned PR and emailed any and every editor she could think of—some she knew, most she didn’t. Despite not hearing back from many, she succeeded in connecting with a handful of interested editors who featured Bathen robes in an array of product listicles across the internet. From Seventeen to Vogue Paris to New York Magazine, influential publications introduced Bathen to their audience as the robe you need right now.

Making mistakes in your first year as an entrepreneur is inevitable. According to Zisman, the learning process that this invites is crucial, especially when you’re small and growing. Not to mention, the repercussions might not be as devastating at this stage. “I know this is so cheesy, but I truly feel that every mistake we made we learned from,” says Zisman. She recognizes a handful of decisions they made along the way and knows that if they were presented with these situations now, they would handle them differently.

Starting a business from the ground up requires a willingness to learn. Zisman says this is why she’s grateful to have trustworthy partners to turn to, especially since they each have their own specialty within the company. Zisman, located in Brooklyn, NY, focuses on production and PR, Painter oversees social media out of Los Angeles, and Diaz-Martin manages inventory, shipping, and customer service from her home in Indiana.

After a year of running Bathen, Zisman is surprised that she ever doubted herself. She says she was hesitant at first, worried that she didn’t have enough experience and therefore wasn’t qualified to start a company. “Especially as women we always think we need to know what we’re doing before we do it, but we don’t. You can figure it out along the way. And that’s one of the best parts about starting your own company or brand. I think if that’s the thing that’s holding you back, then you should probably just start it.”

She said she also felt jaded by the cutthroat startup industry in New York, comparing her company to flashy new startups that launched with significant investments and large teams. She had to remind herself that Bathen was different—and that was OK.

“I think everyone in America is obsessed with the startup mentality and high growth and having investors. I think there are other ways to create your own business. Just because a business is smaller or doesn’t have outside investors doesn’t mean you shouldn’t start it. More people should feel like they can take the initiative to start a business, even if it is a smaller one.”

Since launching the brand in late 2019, the co-founders made back their initial personal investments and then some, and are using it to invest back into the business.

5. Running your own business is both freeing and fulfilling.

“I think the thing that surprised me—there were a lot of surprises—was just how freeing it can be to have your own space to create something.”

Zisman said it wasn’t until she left the corporate world that she realized how much she craved creativity in her life. While grateful for the experience her corporate positions granted her, she felt limited and unable to expand her skillset.

“I think I just needed a creative outlet that didn’t have so many rules, that would allow me to learn new skills that I wasn’t able to get at my job. A lot of times jobs at corporate places can be very structured and siloed. I couldn’t get the experience I wanted or a place to be creative.”

She also enjoyed becoming her own boss and the freedom to make decisions without being scared of failure. “I feel like working at a corporate job, you always feel scared that you’re going to fail and that something could go wrong and people will be upset with you. [Starting Bathen] I was definitely scared, but it was a different type of scared. It wasn’t so much of struggling with how other people were going to react to my failures, but more that it would all fall on me. There’s a freedom in knowing that if you fail, you’re the one who has to answer to it.”

Since launch, Bathen has introduced new products (including face masks and a Bathtan) and are exploring new opportunities to expand their partnerships with ethical social enterprises around the world.

Reflecting on her first year as a social entrepreneur, Zisman says the most rewarding experience was seeing Bathen come to life in the form of a tangible product that consumers were excited about and felt good about purchasing. And she couldn’t be more proud of Bathen’s socially responsible status. “The fact that we know that our products are being made ethically is really gratifying. We know that every time we sell a robe, we’re not just going to hopefully have a happy customer, but that the products were created ethically. That feels really good.”

Jenny is eager to shed light on the latest entrepreneurs, brands and products leading the sustainability movement and making a difference in our world. Her professional experience spans digital advertising, project management, client relations, and all things content—from branded content creation, to custom photo and video production, to social media. Throughout her career, Jenny’s focus has been helping brands identify creative, data-driven content opportunities to drive awareness and generate growth.

37 Social Entrepreneurs To Watch For In 2020