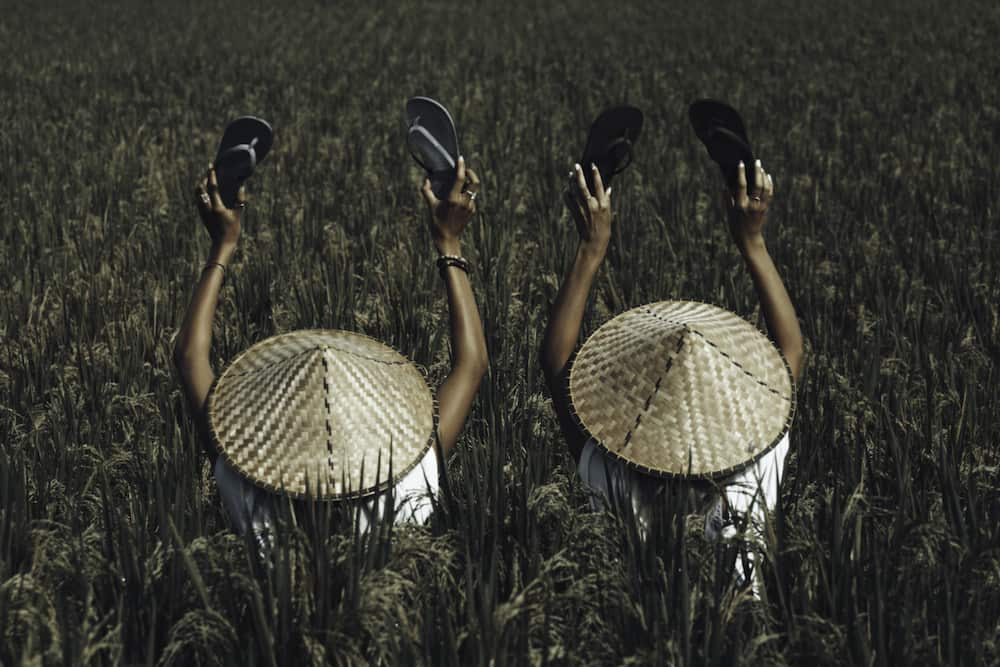 Despite the rise of socially responsible businesses and conscious consumers, the fashion industry seems to be falling behind. It is common to read reports of clothing brands whose ethics and manufacturing practices are called into question—some even accused of slavery in their supply chains.

But errant retailers aside, one still wonders: given the seasonal nature of what’s `on trend’ and the prevalence of `fast fashion’, can this industry ever break out of the cycle of overproduction and overconsumption?

The apparel industry is the biggest polluter after oil, yet overconsumption runs rampant in the sector with the dominance of fast fashion. The appetite for affordable, runway-to-retail garments has dramatically reduced the duration of fashion cycles, and as a result, clothes end up in landfills at lightning speed, emitting toxic chemicals that contaminate our soil and groundwater.

The numbers are staggering, too. The average consumer today buys 60 per cent more clothes compared to the early 2000s, but keeps each garment for only half as long. A single T-shirt takes approximately 2,700 litres of water to produce, contributing to what’s considered as one of the top five global risks: water scarcity. Additionally, polyester production for textiles in 2015 alone contributed to the release of 706 billion kg worth of greenhouse gases; that’s the equivalent of the annual emission of 185 coal-fired power plants.

Fast fashion and an increasingly saturated market have also triggered a race to the bottom, as companies feel compelled to find ever-cheaper sources of labor to make up for declining margins. In countries such as India, Thailand or China—home to the most textile and garment factories—such cheap labor comes at the expense of basic workplace rights and protection.

According to the Walk Free Foundation’s 2018 Global Slavery Index, fashion is among the top five industries most exposed to slavery and forced labor. Clothing products, which are at risk of being produced by victims of slavery, amount to US$127.7 billion in value, the second largest category of imports in the G20 countries after electronics.

In many cases, women, men and children from impoverished rural areas are trapped into joining textile factories under the false promise of decent pay, housing and schooling, but end up working with no benefits and under precarious conditions, at worksites fraught with injuries and deaths.

Child labor is particularly prevalent in the garment industry because children are viewed as obedient workers who rarely speak up, and because much of the production requires low-skilled labor and tasks that are often better suited to children than adults. In cotton picking, for instance, employers prefer to hire children for their small fingers, which do not damage the crop.

“I was in Delhi two years ago interviewing children who’d been in situations of forced labour and modern slavery in factories,” shared Grace Forrest, Walk Free Foundation’s Founding Director, in an interview with Vogue Australia. Forrest described how one of the children she interviewed, a nine-year-old boy, was lured into a garment factory under the pretext of being able to go to school, but ended up being held there for two years, stitching clothes for a manufacturer whose stores can be found all over New York City. “If you look closely at his hands, you can see the scars … from being beaten with scissors when there was a malfunction with the machine.”

Reinventing an industry that thrives on overconsumption, cheap labor and limitless natural resources is a daunting task that will take long-term commitment from producers and consumers alike. The watershed moment came in the 1990s, when the appalling conditions of Nike’s Asian factories were exposed. Brands could no longer close their eyes to practices of slavery in their supply chains, and had to introduce stringent due diligence and audit processes at every step of their production.

Yet looking at the figures released by the Global Slavery Index and cases like the 2013 collapse of the Rana Plaza building in Bangladesh, it’s obvious we have a long way to go. Many people remain sceptical about fashion’s ability to become ethical and/or sustainable, while others wonder if brands are simply exploiting the latest industry buzzwords as marketing ploys. Only time will tell.

As the pressure mounts on labels to be more socially responsible and transparent about their businesses and manufacturing processes, we are also witnessing a new wave of fashion social enterprises. With the emergence of these sartorial ventures come innovations in production practices and new ways to empower vulnerable communities through fashion.

Bali and San Francisco-based Indosole repurposes tire waste to create some of the world’s most durable footwear. Kyle Parsons, Founder of Indosole was inspired to set up his social venture during a maiden trip to Bali, where he was first confronted with the devastating environmental impact of tire waste whilst purchasing a pair of sandals made out of motorcycle tires.

Tire waste amounts to a staggering US$1.5 billion every year and takes thousands of years to decompose. In tropical countries, the disposed wheels often become a breeding ground for mosquitoes, leading to the spread of diseases like malaria and dengue fever. Often used as a substitute for fuel, tires emit toxic oil and fumes when burned, and can catch fire during lightning storms, posing a serious hazard for humans and the environment alike.

The certified B Corp uses a toxic-free manufacturing process and no powered machinery—soles are made of tire cut-outs, while the uppers are constructed from natural materials such as organic canvas, grass or banana leaves.

So far, Indosole has prevented over 100,000 waste tires from reaching landfills, giving them a new life as soles for our footwear. We have provided jobs to many Indonesian craftspeople as well as educational programs on recycling to the country’s youth. Our goal is to use the most thoughtful processes and materials for our products while empowering our customers to make more conscious choices in their daily lives.” —Kyle Parsons, Founder and President of Indosole

Did you know that your morning cup of joe uses only 0.2 per cent of the coffee beans involved in its preparation?  The remaining 99.8 per cent turns into coffee grounds, usually bound for the trash. To tackle the hidden carbon footprint of coffee, a Taiwanese clothing manufacturer introduced a clothing line that’s made out of coffee waste.

S.Café was founded by Jason Chen, CEO of textile-maker Singtex, after his wife made a passing joke about how coffee could eliminate body odor and absorb sweat. After four years of research, Chen became the world’s first garment manufacturer to turn coffee waste into fabric.

S.Café gathers residual coffee grounds from coffee places and stores such as Starbucks and 7-11 as its raw materials. The polyester manufactured from recycled PET bottles is then mixed with roasted coffee grounds to create coffee yarn and eventually clothing fabric. Three cups of coffee grounds and five plastic bottles can produce one T-shirt. Besides being an environmentally friendly alternative to water-intensive cotton, the coffee-laced materials from S.Café also have odor properties, are quick-drying and UV proof.

“It took us four years of extensive research and an investment of US$1.7 million to launch S.Café. We work with over 110 clients including major brands such as North Face, Hugo Boss or Victoria’s Secret. Importantly, our coffee-to-fabric model can be replicated worldwide as a means for coffee-producing communities to earn extra income and improve their livelihoods.” —Jason Chen, Founder and President of S.Café

Chen partnered with Café Buendía in Colombia to extract coffee oil and use the leftover solids to create fabric, which can then be sold to the local market by the farmers who own the coffee shops. In the past, Café Buendía would incinerate up to 25 tonnes of coffee grounds per day, but with Chen’s help, it has successfully monetized coffee waste, something that previously had no value.

Over the years Chen has turned Singtex into the poster child of sustainability. Their growing product line includes “green” fibre combining wood pulp and coffee grounds, fabric printing technology fueled by coffee grounds and “bio-foam” using coffee oil instead of petroleum-based ingredients that can be used in garments, footwear or home textiles.

From empowering refugee children in Malaysia to training marginalized women in Nepal and India and supporting at-risk pregnant girls in Singapore, social ventures that leverage fashion to uplift vulnerable communities abound in Asia.

“The ladies feel like they are discards. But beauty can be brought out of castaways,” shared Jolene Teo, founder of Sowing Room, who merged her skills in business, jewelry and floral design with her experience in counseling victims of domestic violence to create Sowing Room.

Her employees are at-risk women with little formal education and who live in shelters, so learning a new skill is a way for them to heal, earn an income, and—in some cases—start their own business after returning to their home countries in the Philippines, Myanmar or India. Sowing Room sells their designs online, at pop-up stores and in socially minded F&B outlets. The ladies are paid a fair wage for each piece of product they produced.

Two of Sowing Room’s trainees, Jeanie from the Philippines and Manpreet from India, spent several months with the social enterprise before returning to their home countries. Teo gave them a sewing machine each as parting gifts, and both women are now proud owners of their own small businesses.

“Before when I was broke, I was just broke. Now when I’m broke, I know I can create something to sell.” —Jeanie, Sowing Room trainee.

Social ventures are transforming the way we consume fashion, placing ethics and sustainability front and centre of the industry’s agenda. If these socially minded businesses have the savvy and support to grow and thrive, they may just lead the “fashion revolution”.

Why I Started a Fair Trade Chocolate Company at Age 21

5 Simple Hacks to Create a Sustainable and Ethical Wardrobe